How banks have been transmitting rate cuts by RBI

There is a lot of concern raised over the slow transmission of interest rates by banks when the repo rate is cut. When RBI lowers the repo rate, the government presses banks to take action on lending rates but banks are not following the RBI suit.

Two things need to be understood i.e lending rate and interest rate. The lending rate is driven by a formula. One variable is the repo rate which is a very small part of the total cost of funds. The most important component is the deposit cost, which has to change. If this cost changes downwards, the base rate or MCLR will come down accordingly and this becomes the benchmark for banks to decide on the lending rates.

The second is that the mechanics of interest rates changes. Banks first have to lower the deposit rates, but all deposits are generally contractual and have fixed rates till maturity. Therefore, even if deposit rates are lowered, the impact on cost would come with a lag. Now, when it comes to lending rate, once lowered, it would be applicable on all loans and hence the revenue would dip for banks when rates are reduced.

Therefore the crux is when the repo rate is increased by 50 bps, the WALR(Weighted Average lending rate) for banks rose by 51 bps, which has the elasticity of 1. If one tracks the changes in the repo and reaction of banks to these changes, it does appear that banks have been very receptive to policy. There is a little reason to believe that there is any transmission issue with banks. 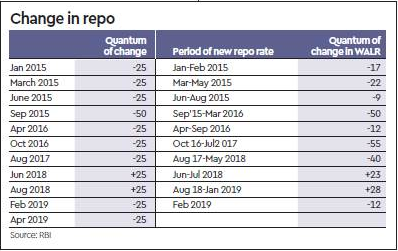 Hence, quite to the contrary, it appears that banks have actually been very receptive to RBI’s policy changes and passed on the benefit of lower repo rates to the customers. This does not appear apparent when one looks at just the base rate or MCLR that have tended to be sluggish in changing as they are driven by the formula where the deposit rate is critical. This is probably why it does look as if banks lower their deposit rates at a faster pace than their lending rates. But, as the data shows, that banks do in fact give a good part of the benefit to the average customer. In fact, banks have been doing so even though the NPA levels have been high with mounting credit risk environment. Ideally, these rates should be less than elastic when the credit risk perception is higher.

This data should also satisfy RBI that has been trying to reconcile the phenomenon of repo rate changes with banks lending rates. Data, however, indicate that the interest rate cut should be given time to work through and, typically, a longer time-period relates well with policy changes. There is definitely no need to get overly critical of bank reaction to policy changes.