Have you ever wondered how successive Govt. use taxpayers’ money to bail out the crippled Indian Banking Sector. More often than not, we tend to skip through the newspapers without realizing the depth of the Banking Sector Problems. Let’s find out what had transpired in the ailing industry last year which could potentially become gangrene if not solved today.

Public Banks which control 70% of the loan & deposit markets in India reported a combined loss of ~Rs. 79,071 Crore during FY 18 i.e. a loss of ~Rs. 9 Crore per hour during the year. Private Banks have also seen their lowest ever quarterly profits in March as net profits plunged about 34% from a quarter earlier.  (Source: The Hindu & Various Media reports)

Moreover, banks have also reported NPA of 10.14%, higher than ever before. IDBI reported the highest NNPA i.e. 16.69% followed by Union Bank of India at 16.49% & IOB at 15.33%. Large Corporates to whom 33% of the total loan was given, were the biggest chunk of NPA accounting for 74% NPA and rest is formed by Agriculture, Retail, and Personal Loan.

And another nail in the Coffin was ~Rs. 13,400 Crore PNB Bank scam by Nirav Modi. A media report states that all 21 PSBs reported a total loss of ~Rs. 22,470 Crore due to frauds in the year. (Source: Hindustantimes) 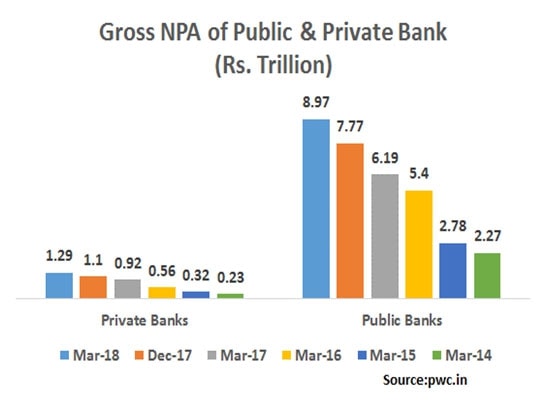 How does it affect YOU?

Due to the poor performances of Banks, RBI has initiated more stringent norms to strengthen the performance of Indian Banks. It has triggered Prompt Corrective Action (PCA) on 11 PSBs which together account for 3/4th of the Banking Assets.

Two Major reforms Recapitalization & Insolvency and Bankruptcy Code were implemented by the Govt. during the year for making the Banking Sector strong enough to withstand economic & Financial Stress. 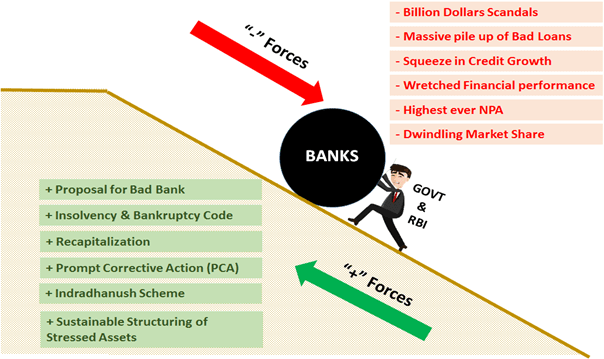 Recapitalization is a 2 year Plan to infuse 2.11 Trillion rupees Capital in PSBs to accomplish the requirement of Capital Adequacy Ratio (CAR) to implement the Basel-III.

Basel-III norms are international standards which are to be implemented by March 2019 to improve the quality & quantity of Capital of Banks, more stringent risk management and disclosure standards which were designed after 2008 financial crisis, triggered by the Lehman Brothers’ Collapse. (Source: Wikipedia & RBI)

But the State-run-Banks are highly dependent on Govt. for Capital to meet Basel-III Norms. PSBs loss during the year have materially eroded most of the capital infused by the government. Govt. has to put in extra money into the Banks and that has to come from the taxpayer. The Indradhanush scheme to revamp PSU Banks has already overshot its budget by close to 11%. (Source :fotuneindia)

In such a scenario of regulatory failure, the recapitalization exercise is just another make shift arrangement to address the issue temporarily. What we need is a long-term sustainable solution. There must be a robust risk assessment and improvement in credit underwriting standard and multi-layered audit system and tighter laws to ensure criminal acts in business leading to punishment of culprit. The Govt. can’t just keep on throwing good money after bad to wash away the sins of few individuals.